What would take you outside of your comfort zone? Wing walking? Swimming with sharks? Getting a hug off Donald Trump in your favourite white outfit?

Well for me, it’s camping. Yep, you heard that right. I am the sort of person who loves hot showers, clean toilets and my own bed. After a horrendous camping experience when I was 11 (freak Lauren out became everyone’s favourite activity on that trip), I had no inclination to do it again. EVER. My friend Lucy put it perfectly when she said “why would you choose to spend your free time living at a lower standard than you do normally?”. FYI that’s the clean version of what she actually said, but it summed up my feelings on the matter. 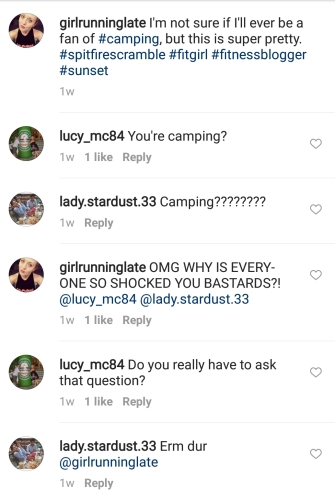 My ever supportive friends and family.

So how exactly did I find myself camping in a field just outside Dagenham, losing punch-ups with poison-fanged insects and substituting showers with baby wipes? I honestly have no idea. I just know that in October last year my friend and all-round adventure-seeker Jen asked for runners to join her team of 8 people for the 24-hour Spitfire Scramble, and I put my name down. I’m assuming she caught me at a moment when both my caffeine and sugar levels had completely crashed and I was in the midst of some sort of hallucination where I thought I was Bear Grylls*. It’s the only thing I can think of.

But July flew round, and three days before we set off I realised I should probably order a sleeping bag, pillow and mat (I’m nailing this adulting malarkey). After a frustrating 2.5 drive from Cambridge, we were in a field on a Friday evening, and I was actually vaguely helping to pitch a tent whilst mildly panicking about what lay ahead. I also had to make the decision to take out my contact lenses and leave them out for the next 36 hours, reasoning that running slightly blind was preferable to an eye infection. That first night, I was so glad that I was in the company of Jen and Becky (later joined by Paula, Fiona, Ruth, Paul, Rachael and Chris, plus Rachael and Chris’ AMAZING dogs Yogi and Boo). They made me laugh non stop, sorted me out with food, and Becky gave me wine, which made her a demi-god in my eyes at that moment. I went to bed pretty early (party pooper), and actually managed a semi-decent 8.5 hours of sleep, only waking a couple of times when the temperature dipped. 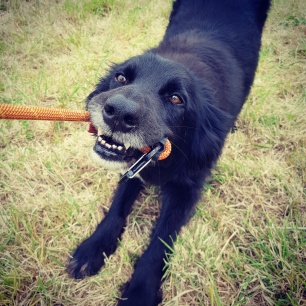 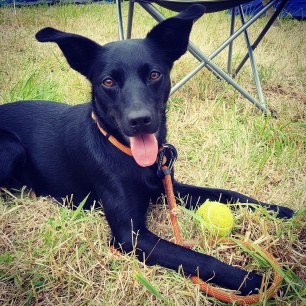 On Saturday morning, Jen, Paul and Ruth made plans to go to Harrow Lodge parkrun just 2 miles down the road. Ruth and Paul had come camping with their incredibly cute 3 year old daughter Katie who wanted to be pushed around parkrun in her buggy, and if you met her you’d find it hard to say no to her too (especially when she talks about being a “hairy” princess and pronounces Essex “Eggets”). Then Jen checked the time of the 1st place woman the week before, and she had clocked 23:58. Obviously my competitive side kicked in instantly,  and knowing that even taking it easy I could do a 22 minute parkrun, I decided to go along. Of course, a SUPER speedy woman turned up and smashed it in 19:38, so I had to make do with 2nd place. It was a lovely course though, and a nice way to stretch my legs before the Spitfire Scramble got under way, and Ruth and I also took the opportunity to stuff our faces with a massive breakfast at the park cafe. I only got slightly worried when it started to rain…

When we got back to the campsite, our remaining team members John and Mel had arrived, and the 8 of us with our support team of Jen, Fiona and Becky were ready to go. With his trusty whiteboard in place Chris took charge of the running schedule, and my first 5.7 mile lap was due to start around 4:30pm. 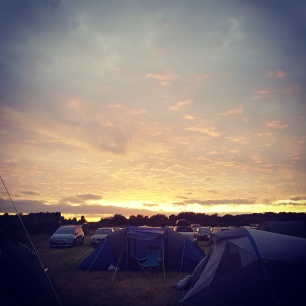 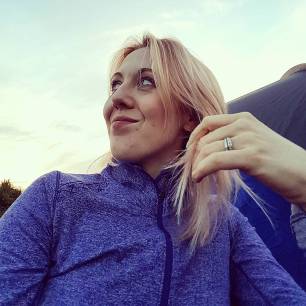 The way the Spitfire Scramble works is pretty simple. There are different categories, from solo runners up to a maximum of 8. We were obviously in the mixed 5-8 category, with 5 female and 3 male runners. We all had to estimate how quickly we would do our laps, and then the next runner in sequence went down to the changeover zone about 10 minutes before the next runner was due in. Initially I’d assumed we’d each do 3 laps, taking it nice and easy and coming in around the hour mark, with the chance that one or two of us might squeeze in a 4th lap.

It turned out pretty quickly that we were all being quite cagey with our estimates and were coming in quite a few minutes under (I estimated 55 minutes but came in at 44 for lap 1), so our runners’ schedule was continuously updated.  As I saw my next laps were scheduled for 10:15pm and 4:15am,  I felt myself starting to panic that I couldn’t even manage a second lap let alone a third, so I messaged my running friends Pete and Rach in a bit of a panic, but with the aid of some trusty GIFs they quickly talked some sense into me. I then saw that our three speedy speedsters John, Paul and Mel had all signed up for a double nighttime shift (just casually running 11.5 miles in the dead of night, no biggie) to ensure that their teammates could get as much rest as possible. So no way was I going to let them down.

Although my second lap was my slowest, it was also my most sociable. I teamed up with what turned out to be the Race Director of that morning’s parkrun, Mark, and when he stopped at 4 miles to get some water from his support crew, I then ran the final 1.7 miles with Shimpei from Guildford, who distracted me from the monster hill that loomed up just before mile 5. I also weirdly enjoyed the 4:30am lap, mainly because I got to watch the (only slightly blurry) sunrise.

When I got back from that lap around 5:15am, I saw that I had been put down for a 4th and final lap at around 9:45am. I cannot tell you how badly I didn’t want to run another lap. I’ll be honest, I hadn’t done any real training for this event. I’d told myself it would be 3 10ks spread over 24 hours, which seems weirdly manageable. Had I known I’d end up doing 26 miles in 26 hours, I would have bleeding well trained. As I got ready to snatch a couple of hours of sleep John assured me that they could cover me if I couldn’t do my 4th lap, which made me feel terrible when he’d already done a double and was down for a total of 5 laps. I went to sleep at around 6am, and told everyone I’d be up at 8am to see if I could manage my 4th lap, but I already knew I was going to do it.

To be honest, I don’t really remember much about that last lap. I’d had a total of around 5 hours of sleep (from around 12:30am-3:30am and 6am-8am), and I was definitely running on pure adrenalin. I thought I’d be lucky to come in under an hour, but I somehow managed 46 minutes, meaning all 4 of my laps had comfortably come in under 50 minutes. In total, our team managed 31 laps, and we came 5th out of 47 teams in our category. We all joined John as he crossed the line for the last time, and the medals we received were frankly awesome.  And then suddently it was all over. I was in complete awe of how quickly everyone managed to pack up their things, and we were on the road by 1pm and in contrast to our journey there were back in Cambridge in just over an hour. 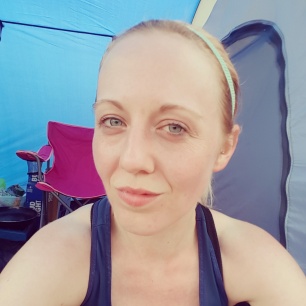 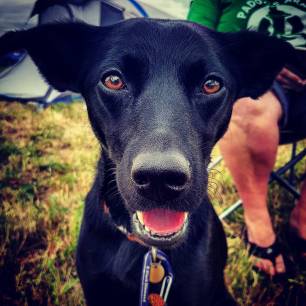 Photo taken after lap1. Boo was the ultimate spirit lifter.

I can say without doubt that the Spitfire Scramble was the most mentally challenging event I’ve ever done, but also the one I’m most proud of. As for my thoughts on the actual event itself, the atmosphere is one of the best I’ve ever come across, with brilliant marshals and a lovely supportive atmosphere from all other runners. Although there were times at night when it felt like you were totally on your own, the event was well sign posted, Jen’s chest light was brilliant (you have to wear a light between 8pm and sunrise), and the mini glowsticks on the path were so useful. They had a water station halfway round the route which was manned throughout the 24 hours, and they had another self-serve one at the changeover area as well. The toilets were really well looked after and regularly cleaned, but you had to get a coach to be driven to a local school for showers, so we all decided wet wipes would be good enough for 36 hours! Needless to say that shower when I got home was the best one I have ever had. Ever ever. The medal is also an absolute BEAUT.

I think the only downside of the event is that they could have done with some more food trucks on site. They only had one, and people were queuing for up to half an hour just to get a coffee. A couple of extra hot drink vans might have been useful (I would have killed for Silver Oak Coffee and the Rural Coffee Project to have been there!), and all of our team agreed that an ice cream van would have been flipping awesome.

My recovery from the event was more intense than I expected. Although my legs felt fine, my back and left foot felt seriously fatigued, and I was mentally exhausted. I would say that I didn’t feel back to normal until the following Friday, and I pretty much ate whatever I could get my hands on for a good 5 or 6 days. The almond croissant market definitely saw a boost.

Would I do it again? If you’d asked me that last week it would have been an emphatic no, possibly accompanied by a headbutt. When Jen mentioned that some of the team were doing the Thunder Run just a week later I thought they were well and truly out of their trees (I still do to be honest). But as each day passes, a teeny tiny part of me is thinking “hmm….maybe…”. So ask me again in a couple of months. Maybe that sleeping bag will see the light of day again after all. 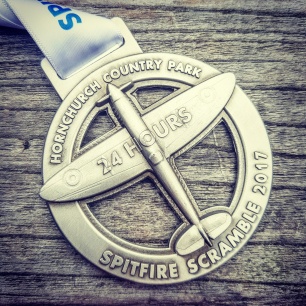 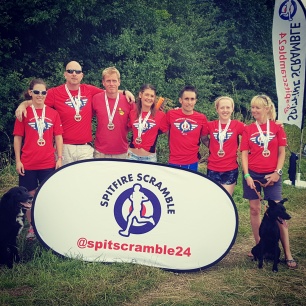 *Yes. To me 2 nights of camping is the equivalent of Bear Grylls living on an island for 60 days eating nothing but sand and raw fish and sleeping under a net of snakes whilst setting fire to himself. I’m a drama queen, ok?