Let me start this by saying that on the whole I think that social media is all kinds of awesome. Without it I never would have met my running buddies Oli, Matt and James, I never would have talked feminism and trolls with Caroline Criado-Perez (OBE!), I would find it harder to stay in touch with family abroad and I wouldn’t have passed many gleeful hours harassing @Selfridges with my fashion soul-mate Ally. My experience with it is mostly fun and positive and full of like-minded people.

But sometimes, social media can be really, really crappy.

The latest tedious case in point? The ludicrous #BellyButtonChallenge

For those of you who aren’t au fait with internet stupidity (not sure what that comment says about me but let’s plough on), the belly button challenge originated on Weibo (the Chinese version of Twitter) and is supposedly based on a “scientific study” from the US (although citation of said study is surprisingly absent). Essentially, if you can reach behind your back and around your waist to touch your belly button, you’re fit and healthy. If you can’t, best put down the doughnut and get on the treadmill sharpish. It looks like this:

Are you kidding? I’m not sharing this rubbish. Google it yourself if you must.

I mean seriously? SERIOUSLY?! It’s not the fact that some moron has come up with this complete and utter twaddle that bothers me (there will always be morons and they will always bring their twaddle). It’s the fact that as of a week ago there had been 140 million posts about it, so I dread to think what the number must be now.

I’m going to let you ponder that number for a moment whilst I eat the aforementioned doughnut.

As an adult who works in fitness, I know that this is a test of flexibility. In this specific instance, shoulder flexibility. If you have flexible shoulders – be proud and show it off! I’m not above busting out the splits or crow pose when the fancy takes me. 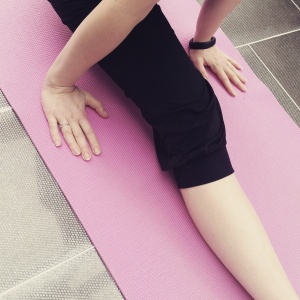 But don’t you DARE peddle this as a sign of good health to impressionable young girls and women, who – mainly thanks to the media – base a huge amount of their self worth on what people think about how they look. One 24-year-old woman in Chongqing dislocated her shoulder from repeated attempts to reach her belly button for crying out loud (Google translate that page if you want a giggle).

And as if that wasn’t bad enough, a couple of days ago the Clavicle Challenge reared its ugly head, again courtesy of Weibo. GOODY GOODY! This time people have been balancing coins along their clavicles to show how skinny they are. If you can’t balance a stack of pennies – SHAME ON YOU!

And this is the crux of the matter. It is body shaming, no two ways about it. China clearly has a problem with encouraging women to be unnaturally thin. To put it another way, this is a country where I – a UK size 6-8 – would be hard pushed to get into a size large. But this is just a drop in a nasty, bullying ocean. We have US schools body shaming girls by sending them home for wearing shorts in 90 degree heat, but allowing BOYS TO WEAR SHORTS OF THE SAME LENGTH OR SHORTER (essentially telling girls that their bodies are a problem that need to be hidden).

We have Protein World and their frankly pants, lazy advert (same goes for Victoria’s Secret, but at least they stepped up). We have celebrities torn apart by revolting “journalists” (who I won’t be linking to here) for not losing their baby weight in two weeks. And on the flip side we have Plus-Sized brand Taking Shape body shaming thinner body types at London Fashion Week. And every single one of these things can be viewed by a 12 year old girl who starts plucking at the skin on her stomach and asking her parents if she’s fat, like the daughter of a friend of mine did recently. This crap filters down.

Luckily, whenever these stupid things happen, there is always someone waiting to turn it on its head and poke fun at it. Case in point is lingerie brand Curvy Kate, who decided to run with #boobsnotbellybuttons. Exhibit A:

Thanks to @danifearon11 for this.

This isn’t a flawless response, because Curvy Kate only do bras for D-cups and up which rules me out for one. But it’s a start. It’s a chance to showcase a plethora of different body types by confident, beautiful women who are poking fun at the ridiculousness that can be found on social media, which is what young girls need to see.

Body shaming, whether it’s of someone who is a size 0 or a size 22, is bullying. It’s not a grey area. And you know what? As an insecure teenager I was probably guilty of it to others and myself when I was growing up. But I’m older and wiser now. Although I might look in the mirror sometimes and not like what I see, more often or not this comes from my inability to get the same amount of volume in my hair as my hairdresser does. I think of my body more in terms of what it can do, and in my case it’s do a chin hold for 60 seconds, it’s running a 5k in 21:27, it’s hip thrusting 62.5kg and it’s running a half marathon dressed as a boob (almost) without hurting myself. My body is capable of more than I ever gave it credit for when I was younger, and I love it for that.

So in response to social media’s behaviour in the last week, I posted this:

Wouldn’t it be great if every woman posted something that made her celebrate her body with that hashtag? If you’re feeling this post please do the same as I’d love to see it. And as for Curvy Kate, I love them for their response to this:

That’s what I’m talking about.