So I’d not had a cold for two years which is something I’d been feeling extremely smug about. Sports Centres can be a bit of a hotbed for catching stuff simply because you cross paths with a lot of people, so I was proud of my super fit body and its incredible resistance to germs. So when I felt my throat get a bit scratchy last Thursday evening, I went straight into denial. When colleagues asked me on Friday if I was getting a cold I told them I was fighting a cold and winning. Then after a day in London with TheeMiddleSister I realised my voice was starting to crack and my cough was getting a bit, well, manky.

If I’m being honest, on Saturday night I was leaning towards no 10k and trying to get friends to convince me on Facebook. And it so nearly worked….

But I admit it. I’m a sucker for a medal, and even though I knew it would hurt and I’d most likely be spluttering my way round the course I got up at 8:45, stuffed myself with my Runner’s Muesli from Germany (thanks Gary and Jana!), drew pink stripes on my face with my sunblock stick and cycled off to the station.

The thing that I always love about the Race for Life is the sheer scale of the event and the incredible message behind it. On the train I chatted to some women who were also planning to walk, jog or run the 5k, and as I walked to Parker’s Piece there was a steady stream of pink-clad women and children leading the way.

The warm up is always brilliant for this event, but when I saw the frankly RIDICULOUS queue for the toilets I knew I was going to miss it as I chose to walk to the Grand Arcade instead. I’m sure they had more toilets when I did this race two years ago, or maybe there were just fewer people taking part that time. Either way, they needed far more facilities.

The setting up of the runners was a little erratic, but the majority of the 10k runners went off first with the 5k runners following shortly after. What this meant for the finish times I’m not sure, but I assume the clock started with the first wave of runners – my sportswatch certainly seemed to agree. And while the first 5k followed the same route as previous years through town and the Colleges and ending at Jesus Green, as we were siphoned off at around the 4.5k mark the second 5k felt like an afterthought.

The signage and marshals were pretty spread out and at one point we were taken over a field riddled with spiky weeds. Then when we doubled back, those of us at 9k were passing runners just beyond the 5k mark, but we weren’t separated on the road. This led to a serious bottleneck through the gates where only one section was open (I had to duck under a ribbon at one point) and the marshals were dealing with different groups at runners. At one point I had to stop because it wasn’t clear where I should go, and the marshal was busy dealing with another participant so I had to wait until the supporters watching on the sidelines directed me. When I then merged with the 5k runners about 300m from the finish it was a frustrating scrum to the end.

As for my race, I knew I was in trouble at 4k. My cold was sitting heavily in my throat and my breathing had gone to pot, leading to stitches and a generally uncomfortable gait. I had to stop to walk around fives times as I battled to the end, frustratingly having to let the girl I had passed at 2k get ahead of me. The trouble is, once I stop to walk once, I find it really hard to get into the right mindset again, so the cold took control both mentally and physically. My voice was also a wheezy, husky mess by the end, much to the amusement of the one or two people I knew at the finish line. By some miracle I had scraped a PB, but it wasn’t fun.

The dog tag style medal we got at the end was pretty cool, but the protein milk drink I got (some kind of mango flavour) was frankly revolting. I would have preferred a banana or Eat Natural bar to that and the strange brioche things they were handing out.

I think my overall feeling of the 10k race was that it just hadn’t been thought through well enough. I don’t know if the organisers spoke to those who organise the Town and Gown 10k or the Half Marathon, but I would have been inclined to siphon us off earlier and take us on a wider arc from Queen’s Road round up to Chesterton Road and back round Elizabeth Way/East Road. I appreciate closing roads are a problem, but I think the current route is detrimental to runners. If it doesn’t work as part of the 5k, maybe they should be separate events, or maybe they should even just stick to the one.

The most important thing though, is the hugely accessible nature of the race and the amount of money raised. not to mention the sheer emotion behind it. And no other race can better that. 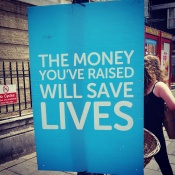 I also have to give a shout out to the AMAZING FlipBelt I wore for the race. I won this from the awesome Marathon Sam on Twitter, and did wonder whether or not I’d get much use out of it and whether or not it would actually be any good. But I can confirm that it is GENIUS. I was on my own at the race with no supporters (I know, I know – tiny violin) on the sidelines to hold my keys / train ticket / lipbalm / phone, so I shoved them all into the belt. The whole way round the race I completely forgot I was wearing it, and I admit I was a little surprised to find that everything had stayed inside during the race. My lipbalm had simply moved around to the back of the belt and that was it. If you find you sometimes need to carry something when you run and hate the sensation of things bouncing in your pocket, I cannot recommend the FlipBelt enough. And of course, I was wearing the pink one. #PinkArmy all the way. 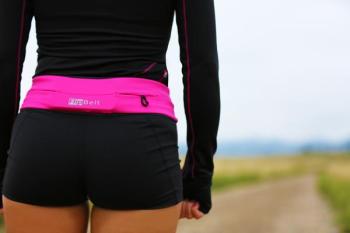 Not my bum – someone else’s bum. Photo courtesy of FlipBelt UK.