You know all those times when I’ve complained about how hideous running is and how much it hurts and how it sometimes makes me feel like I might die as I throw a tantrum face down in the mud? You know, the subtle stuff?

I take it all back. I’m a running blogger who can’t run, and it’s awful.

So this foot niggle that flared up 3 months ago is still going strong, and the current thinking is that it’s posterior tibial tendonitis. Trips off the tongue doesn’t it? These two fun chaps can explain it for me because I think typing the symptoms out in a blog post might tip me over the edge. Upshot is that tendonitis is an absolute bugger, and so far mine is proving to be incredibly stubborn (I wonder where it gets that from)? 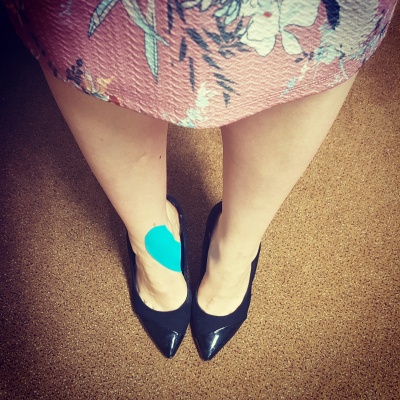 Despite my best efforts to stretch, ice, strengthen, offer up my first born to the local witch… it feels better, I run a bit, and then it feels bad again. There seems to be so little progress and it’s driving me nuts. I will admit that maybe I’ve been trying too much too soon, but in my mind 3 miles with the juniors is not a lot of running. However, when my fabulously patient physio Megan saw me last, she explained that to go from nothing to 3 miles is a lot on a bad foot, and that I need to raise up my rehab efforts and bring down my running so that they can meet somewhere in the middle. In other words, I need to dig deep and find some patience. So my foot and leg exercises are now being done with a 7kg kettlebell, and this week I’ve run for 5 x 30 seconds twice. So in a week, I’ve done 5 whole minutes of running. Insert massive hurrumphy sigh here.

Now don’t get me wrong. I know that in the grand scheme of things I’m extremely lucky. I’ve met runners who have battled back from strokes and blood clots, and people who rock up to parkrun week in/week out and have to run/walk it in 50 minutes because they have an illness that prevents them from doing anything more. But running is a huge part of my identity, and after three months of this, I’ll admit that I’m struggling. On a Sunday I find being on Facebook and Twitter really difficult as I see friends celebrate great races, flash their medal bling and record PBs. I’ve had to miss out on two club runs already this season, as well as some of my favourite races like the Town and Gown 10k.

BUT. As difficult as I’m finding it, I’m not going to shut myself off from the world of running. I’ve been volunteering at parkrun, cycling whilst friends run, getting involved in ukrunchat on Twitter, organising my running club’s Christmas parties and congratulating friends on their achievements. I know I’ll be back there soon. I know I will. I just wish it could be sooner rather than later.

In the meantime I’m climbing more, doing yoga, and finding cardio alternatives to keep myself sane. Against my better judgement I’ve even promised my husband that I’ll try a spin class despite claiming that hell would have to freeze over before I would even consider it. He said “even if you hate it and least you’ll get a blog post out of it.”

How well he knows me.

I'm practising my headstand in lockdown. You? And yes, I know I'm as pale as the moon and my lawn is in a right old state...
Hair brushed (ish), dress on, bit of make up... most days I'm living in @sweatybetty with my glasses on and hair in a ponytail but it feels good to make an effort for no reason!
Just thrashed out a 4 miler - 2 miles out hard, more gentle 2 miles back. Gorgeous day for it, not many folk out and about. I miss my running buddies though.
Very very lucky to live where I do. 5k walk with the husband this afternoon.
@teamrunderwear pyramid challenge done!
Another speedy, socially distant run with Pete and his massive hair.
@barrysuk live Insta class in my new obnoxiously bright @sweatybetty top. How are you all staying active today?
Thank you @turtleflea. I really needed that (socially distant) bike ride through the fens!
Remember when our work breaks involved putting the kettle on and a catch up with colleagues? Well now I force myself outside to do something. Today it was dusting off my hula hoop. What are you doing that you've not done for a long time?