Spoiler alert – that was a proper click-baity title. Because I’m not coping with the heat. At all. I am one of those British people who moans constantly as soon as it gets above 20 degrees. I need to move to Shetland.

Anyone who knows me knows I’m a winter girl through and through. As well as being a Christmas monkey (yes I will share Elf memes from around September until you mute me), I love the feeling of icy air in my lungs when I run, not this hideous soup-like substance I’m having to breathe through every time I step outside. I’m the girl who went out when it was so cold that her eyelashes froze together, and when she warmed up resembled Alice Cooper as her mascara ran down her face. Plus I am incredibly fair. My version of a tan is looking ever so slightly less blue in the summer. I am losing hours of my life to applying factor 50 every day, and am sweating from my knees for crying out loud. And don’t even get me started on just how terrifyingly red my face is capable of going.

HOWEVER. I am still managing to run and there are a few tiny things that I am doing that are making life that little bit more bearable. For me at least. Sorry for my husband/officemate/friends/fellow train users/everyone I come to contact with who is having to deal with the worst version of me right now.

When you find a fellow hater of heat it is a glorious thing. Take for example my running buddy Serena (check out her awesome blog here). We spent a lovely time on Saturday morning discussing the futility vs necessity of showering in this weather (shower, get sweaty dressing, repeat until the four horseman of the apocalypse turn up and ask if that thing they can smell is you) and how much we miss running in the cold. We knew we could offload on to each other without risk of a judgey eyeroll and someone saying “what do you mean? It’s lovely out there!”. Try telling that to the grass you lizard-human hybrid.

Due to my dependence on our often lacklustre summers, I had (somewhat accidentally) found myself with 5 races in the calendar within 19 days during this heatwave (at time of writing I’m 3 down, 2 to go).  This has meant that I’ve had to arm myself mentally and physically for these challenges. Physically, my water intake has gone up, especially in advance of a race. I sweat A LOT in these conditions so I have to make sure I’m well hydrated. During my 10k last weekend I stopped at both water stations to properly drink and pour some water on my head. I’ve also dug out my O.R.S Electroylte Hydration Tablets, something I’ve only ever used during half marathon training before. In addition to this, I’ve been stocking up on Ronhill Visors from my local independent sports shop. These are super lightweight and have been an absolute game changer in this heat. If there are none left in Ely you know who to blame.

Mentally, I’m trying to make sure I back off slightly in races. This isn’t easy when you’re competitive, even less so when you’re racing against people with a much better tolerance of the high temperatures, but it’s an absolutely necessity. People have been collapsing on runs in this weather, and I don’t intend on being one of them. I’m finding that I’m coming in around 2 minutes over best race pace on a 10k, and around 40 odd seconds on a 5k. I can deal with that, mainly by reminding myself that this is excellent training for winter. 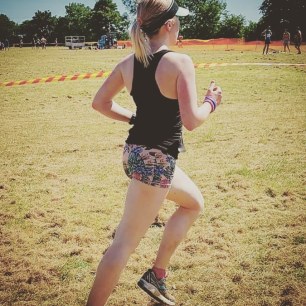 I’m usually a pretty sound sleeper. I can drop off quite easily, and generally if I wake up in the night I don’t tend to remember it. But in this weather I can find myself taking at least 30 minutes to drop off in my bedroom, which has been sitting at around the 26 degree mark since this heatwave hit. So I’m grabbing power naps when I can in an attempt to simply top up my energy levels which have really dipped over the last couple of weeks. I’m also a big fan of the Mama Mio Liquid Yoga Spray, which I use on my pillow to help me to try and relax.

I’ve recently discovered Rowntree’s Watermelon Ice Lollies and the thing I never thought would happen has happened. They have knocked Twisters off their decades long spot as my favourite ice lolly. Get yourself down to your local supermarket and thank me later.

If you’ve read some of my blog posts before, you’ll know I’m a big fan of the Parkrun movement. Anything that gives people the opportunity to get fit for free in a positive and welcoming environment gets a big thumbs up from me.

But hang on a second. It’s not completely free is it? At each Milton Parkrun (the one I attend most often) a minimum of 22 volunteers are needed to ensure the that the run happens efficiently and – most importantly – safely. People are donating their time to make sure that 400+ people get to enjoy their timed 5k for free each Saturday morning.

Now I’ve only recently become a super keen Parkrunner after trying it once in 2012 and for reasons unknown to me only returning again in April this year. I think my dislike of early mornings (especially at the weekend) combined with the thought of having to schlep 14 miles for a run I could do around Ely just seemed like too much hassle. But after being drawn back in by Pete, I’ve now realised just what a fantastic concept Parkrun really is, and how great it is for measuring how much I’m improving at my running.

Just look how many Parkruns there are! This makes me happy.

To give you some data on the Milton Parkrun, there have been 283 runs to date, and it celebrated it’s 5th birthday on the 31st January this year. On average it has 283 runners each week, but I suspect this number isn’t a fair representation of the “current” average as I usually see finishers in the low 400s each time I run. Last week saw 440 finishers cross the line (the highest ever has been 500).

In addition to this, as of today, 9994 unique people have run the Milton Parkrun, so how on earth should they ever find themselves in a position where they’re struggling for volunteers? Fiona English, who was Run Director last weekend, was the ONLY Run Director out of 7 on Cambridge Parkrun’s books who was available. Without her, the run simply wouldn’t have happened. Fiona is a keen runner who gives up her runs to allow others to enjoy theirs (and she’s already back on the roster for the run on the 4th September). Many people like Fiona are committed to playing their part in making Parkrun happen.

So I decided that after 8 runs (7 at Milton) it was my turn to do my bit, so I thought I would try to cycle from Waterbeach station (something I’ve been meaning to do for a while so that I know how to get to Parkrun should driving not be an option) and I opted for barcode scanning, so that if my train were badly delayed it wouldn’t be a major disaster as I wouldn’t really be needed until 9:15 at the earliest (to scan the super speedy runners).

Lovely morning for a bike ride.

As I cycled along the river past Horningsea I realised that it was actually pretty flipping warm for 8:30am on a Saturday, so I was ever so slightly smug that I had picked this Saturday to volunteer. I hate running in the heat – I struggle MASSIVELY with it and generally avoid it whenever possible (roll on winter). When I arrived at Milton Country Park I realised I was on the opposite side to where the run starts, and the place is quite frankly a flipping maze, so I just belted around on my bike, imagining myself pelting into poor unsuspecting Parkrunners. Luckily I suddenly found myself by the 2k marker and finally arrived at the start with 8 minutes to spare, hot and just a little bit bothered.

Getting myself set up with what I needed to volunteer couldn’t have been easier. I just got my name ticked off the list and was handed a high vis vest, a barcode scanner and a print out of position barcodes for the odd few finish tokens that don’t have a barcode to scan. I then got to chat to a few other volunteers before Fiona conducted the usual pre-race briefing to all the runners, which this time included a pretty serious plea for volunteers for future runs.

Next came the fun bit. As my volunteering role wouldn’t start for another fifteen minutes at least, I got to stand with many of the other volunteers to cheer on the runners. Watching people run is one of the best feelings, from seeing those who will be finishing in sub 20 minutes belting out from the trees after the first lap, to those with dogs and pushchairs and first timers pushing themselves through the heat. Whether they will be finishing in 16, 25 or 45 minutes, everyone seemed to enjoy hearing us whistle and clap and shout “well done!” or “keep going!”. Getting a smile or wave or even a return clap in acknowledgement was fully cockle-warming. 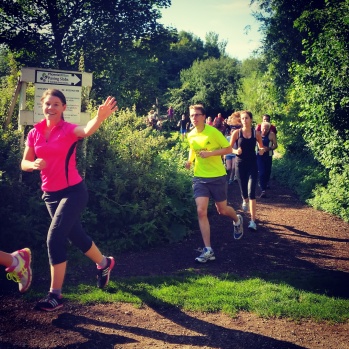 The joy of Parkrun summed up by one runner.

After the majority of runners started hitting the 3k mark, I saw the front runners appear for their final 200m sprint to the finish and so took up my place at my little station ready to start scanning, muttering over and over to myself “person then position” in the hope that I wouldn’t actually muck it up and scan everyone’s barcodes in the wrong order. Getting to congratulate tired, hot and sweaty runners who were (mostly!) grinning ear to ear was so much fun, and it was utterly lovely when someone thanked me for volunteering. I got to see a few familiar faces too, scanning the codes of Ely Runners Rich and John and seeing my sister’s friend Anne who told me that Stacy was considering coming along to one (come on Stace)!

By about 10:10 my work was done, and I handed over my kit before using the Google Maps on my phone (!) to navigate my way out of the park again. I had had such a brilliant time, and getting a text from Parkrun thanking me for volunteering in place of my usual results text was a really lovely touch. Not even my late train home could affect my mood.

So, if you’re someone who goes to Parkrun pretty much every week, you should be looking at volunteering every 15 runs or so. And if you’re unlucky enough to be injured, find the positive in the situation and use it as a reason to finally volunteer and keep connected to the running world. Parkrun is a community of utter awesomeness, but it needs people to be generous with their time. So don’t be that person who just takes but never gives anything back. No one likes that guy.