Right, for those of you haven’t seen the social media rumblings around Protein World’s recent campaign that is currently all over public transport in our capital, it goes a little something like this: 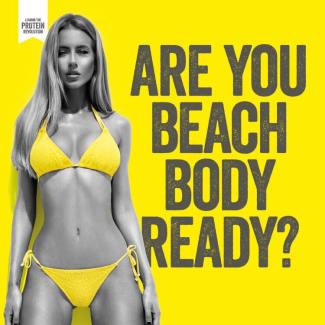 Now, a lot of people have taken great offence to this, because of the implication that the company is saying that if you don’t look like the model in the photo (the lovely Renee Somerfield), you shouldn’t be wearing a bikini on the beach. It’s the suggestion that only a certain type of body is ready – and to another extent welcome – on beaches. And I’m afraid that no amount of supplements is going to give me that torso. I’m 5’3” and extremely short-bodied for crying out loud.

I’ve found the whole debate interesting. The argument has involved fat shaming and nasty Twitter exchanges against feminists who are called “Feminazis” and are accused of being obese, ugly and jealous. Then there’s been fit shaming against Renee (who clearly works hard to look like that) and the argument that people should pick their battles because let’s face is – sex sells and it has done for a really long time. Protein World are not doing anything that hasn’t been done thousands of times before. But for me, and for the majority of other people who have voiced their dismay at the campaign, the problem is based around the message, not the imagery. Playing on people’s insecurities is always a weak ploy.

Another side to this story, is the way Protein World have handled the backlash. Rather than being cheeky or maybe even asking their naysayers what they would like to see in their advertising, they’ve decided to retweet really offensive tweets against women. Here’s an example for you (some of the milder ones to avoid multiple swears on here): 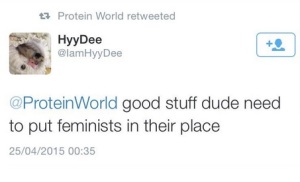 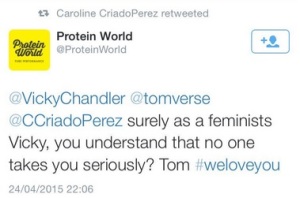 But do you know what my problem with Protein World is? The fact that for a company supposedly promoting fitness, they are in fact really flipping LAZY.

Let’s picture the scene. Imagine a brainstorming meeting about their new summer campaign. They need to come up with a brilliant new idea to sell their product to new markets. Now, what awe-inspiring, innovative, earth-shattering new idea are they going to use for this?

“Why don’t we put a model in a really small bikini?”

SHUT THE FRONT DOOR. This is flipping genius! I can just imagine the high-fiving and back slapping that went round after that!

The really disappointing thing is, Protein World have got it really right in the past. I mean, just take a look at these images: 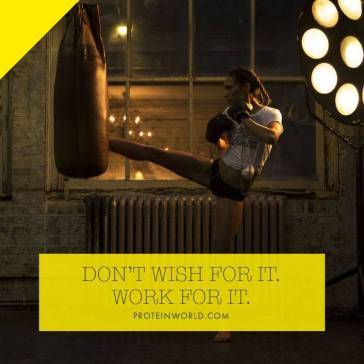 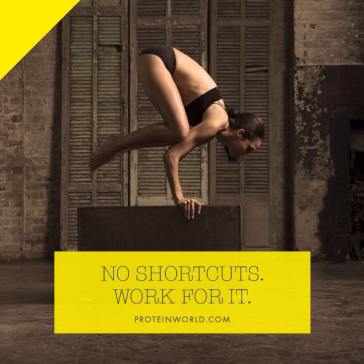 All Protein World photos taken from their Facebook page

I work and socialise with a lot of women involved in fitness, and we’re all far more inspired by images of strong women working hard to make themselves fitter and stronger. I particularly remember the debate we had around the England Netball posters for their “Back to Netball” campaign that showed women posing with balls in casual clothes rather than them ACTUALLY doing sport. 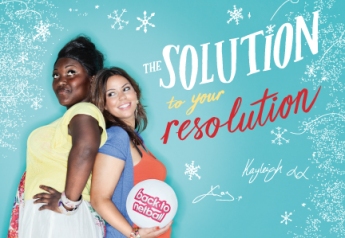 I mean seriously. What is this?

On the whole though, Protein World’s advertising is just pants. Literally. Of the 192 photos (at the time of writing) that they’ve posted on Facebook so far in 2015, 57 of them show scantily clad women, and 7 show scantily clad men (I didn’t count the images of the couple they used in their Valentine’s marketing). Of those 57 photos of women, 13 are close ups of the woman’s backside. There are no close ups of men’s backsides. Just FYI. 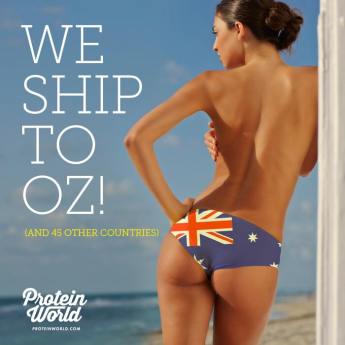 A very relevant image to accompany the message they’re making

I guess my point is, that I am far more likely to make changes to my lifestyle if I’m inspired into doing so, rather than “guilted” into it, and I think most women feel the same. I work in fitness, so I am their target audience, but based on their responses to the backlash and their general use of imagery in their marketing, I’m not inclined to buy products from a company that views women in the way Arjun Seth and his company clearly do. And since I already have my bikini, I’m already Beach Body Ready. Just like everyone else.