There’s nothing quite like an epic panic to start off your first ever triathlon.

So in the lead up to the Ely Sprint Tri I’d been pretty blasé about the whole thing, leaving it until six weeks before the event before practising my swimming for the first time in two years (give or take the odd spa day splash around here and there) and I didn’t open the race guidelines email until two days before. I think it was two parts denial, one part trying to resist putting too much pressure on myself. Because let’s face it, I am hyper competitive, especially with myself, and if I read too much about the race I would start looking at ways to be THE BEST I CAN POSSIBLY BE which is fine with a bit of experience but I think a little unreasonable when I don’t even know how to transition efficiently. For crying out loud, I didn’t even know what a transition MEANT until about a month before the triathlon when my friend Helen (who lent me her race belt) filled me in.

What the hell is a race belt?

Then two weeks before the triathlon, my amazing best friend Michelle piped up that she had a tri bike that had been sat in her shed for a couple of years, and that I was welcome to borrow it. She knew that the tyres were flat, but it turned out that it needed about four hours of serious TLC to get it in racing condition. But my brilliant husband worked flat out to get it race-ready, including one 90 minute period where the two of us had to both turn into The Hulk to get one of the pedals off (attempting clippy shoes was a new experience too far). On Friday it was ready, so I cycled around Ely on Friday evening and Saturday afternoon just to get used to it.

So, on to Sunday morning, and I woke up at horrid o’clock (6:50am for all you early super-keen types) and got dressed in my lovely Zoot tri shorts and a Nike top (again borrowed from Michelle). I then unlocked the garage whilst my bagel cooked, and saw THE FRONT WHEEL WAS OFF THE BIKE. At first I wondered why on earth Ian would think that would be a funny joke, but then I realised that the flipping thing was flat. It turned out that there was a flaw in the inner tube by the valve, and despite a panic twitter plea for a spare racing inner tube, I knew in my heart that with only 15 minutes before I needed to leave the house all was lost. So I took the sticker off the tri bike and stuck it on to my twice-as-heavy hybrid instead. The 20km bike ride had just become a whole lot harder.

This was going to be interesting.

As I cycled from my house to the start at King’s School, I was upset about the bike but more because of all of the effort Ian had put in on a bike that I wouldn’t be able to use. But looking at the bigger picture, it’s lucky I had taken the tri bike out for about 5 miles on Saturday, because if I hadn’t that flat tyre would have hit around halfway through the 20km which would have ended my triathlon. So after stomping around and whinging for a bit and getting a pep talk from both my dad and Alan, I pushed the negative thoughts aside and decided to just enjoy it and give it the best shot I could.

Because I hadn’t swum for about two years when I signed up for the tri and can’t front crawl so have to rely on my (fairly decent) breaststroke, I vastly overestimated how long it would take me to do the swim. This meant that I was one of the earliest competitors amongst slower swimmers. As it turns out I can manage 300m in around 7 minutes, so I had added more than 50% on with my 11 minute guesstimate. Luckily it didn’t have too much of an impact on my time, as (most of) the swimmers around me were really considerate and allowed me to get past them at the end of the lane, so I exited the pool at 7:33. 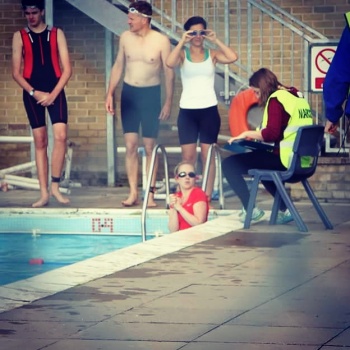 As predicted my transition out of the pool was not fast as I pulled on my socks, race belt, trainers and helmet, and lifted my heavier than planned bike off the rack before running out of the gate. 1:17 had been added on to my time (the guy who finished first was out in 29 seconds!), and I started the bike ride as I meant to go on – by BELTING it.

I overtook my first road bike cyclist halfway up St Mary’s Street before the A10 roundabout, and I overtook my 2nd one just before the turn to Coveney. I was then overtaken by someone else on a road bike before overtaking another one halfway to Coveney. I went past the next one at about mile 9, careful not to draft at all after a stern warning by the Race Director during the race briefing, and then to my (competitive) joy I got past the woman who had overtaken me, and stayed ahead of her for the rest of the bike ride. To say I was pleased to only be overtaken once during my entire bike ride in a field of serious road bikes is an understatement. Ending the bike ride up Back Hill was torture and my quads were starting to question my sanity, but having Alan cheering my name and then seeing my parents grinning at me as I dismounted from my bike and ran to rack it again was just awesome. 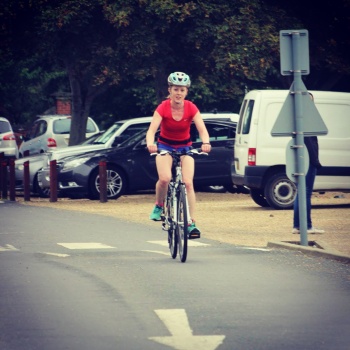 After failing to find my bike space for a few seconds, I got told by an amazed marshal that “I did well on that!” with a nod towards my bike, before taking a swig of water and exiting the pen for the final 5km run, cheered on by my friend Matt. That transition was 57 seconds which seemed sloth-like but actually in comparison to others wasn’t all that bad.

The run was the weirdest and hardest part of all. I’m so used to feeling strong and fast on a 5km that this came as a bit of a shock. I knew it would be difficult, but the short sharp hills on King’s School’s fields were intense and I felt like I would be lucky to come in at 25 or 26 minutes. I felt SO slow and heavy-legged, and Alan’s yells of “head up!” and “use your arms!” were met with a one-fingered salute, much to the amusement of the crowds. But I finished without ever having to slow to a walk, and managed to actually spot the photographer at the finish line before collapsing in a heap at my parents’ feet and being congratulated by my awesome friends Pete, Rach and Diane who had come out to support me. 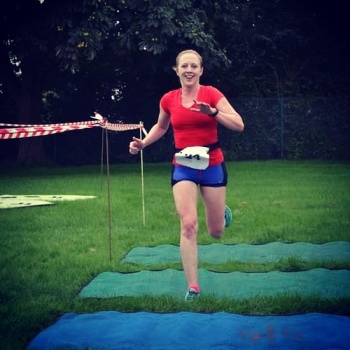 As it turns out I completed the run in 23:33, making me the third fastest woman in the running leg of the triathlon, just 20 seconds behind the fastest. My complete time of 1:17:44 placed me as 6th woman, 5th in my age category, and the 37th competitor in a field of 101.

I thought that I would be pleased to complete the tri but have no desire to do another one. I was completely wrong on the second count. I LOVED it and am already looking for other ones to attempt. I have fully caught the tri bug. Unless I learn to front crawl my options for races may be somewhat limited, but I can’t wait to see what I could potentially achieve with a proper racing bike and a better understanding of the details such as transitions. As for the race itself, the Ely Sprint Tri is quite a small one, but despite this there were only some minor issues such as my getting the wrong stickers in my race pack so that I had to go back to the registration site to change them. I also would much rather get a medal for competing than a t-shirt, but then I am an epic medal tart and always want to add to my little plastic box of shiny discs. I’ll just have to work harder next year to get first place (ahem).

Alan texted me afterwards to say “I think you’ve found your sport”, but I’m not sure about that just yet. One thing I know for sure is that I have never felt so exhausted after a race, so I can only assume that will get better with experience! That didn’t stop me from going on a shopping spree with my friend Elaine in Cambridge afterwards though. If I didn’t get a medal I was blooming well going to get a nice dress.