When I was contacted by Rowan from Pilatesfit on Twitter with the opportunity to try one of their classes*, I leapt at the chance. Even though Vinery Road is a bit of a trek from where I work, it’s nice and close to Cambridge train station which is a bonus. As I’ve only done a handful of Pilates classes in my time (I’m more of a yoga girl generally) I booked in for a Beginner’s Class with Michelle Njagi on Friday 11th March at 6:15pm. It seemed like a good opportunity to end my stressful week on a relaxing high.

I have to say that a rather fraught journey up Mill Road meant that I wasn’t feeling especially chilled when I finally reached the Pilatesfit Studios. I thought everyone escaped early on a Friday but clearly no one has told the irate road users congregated in this part of Cambridge (slow hand clap to the cyclists who think it’s ok to mount the pavements and scatter pedestrians to get through it). And when I found the Studios I wasn’t completely convinced that I had actually found them, but the road numbering suggested I had.

When I first opened the gate and saw a large dog walking into a door on the left I was a bit worried I had walked into someone’s front garden (a common mistake on a first visit Rowan assured me) but to be fair, that kind of is what you’re doing (and signage outside is coming soon!). To give you a bit of background, the founder Rowan has worked as a Physiotherapist in Cambridge for about 17 years, and then started Pilatesfit about 2 years ago. After word of mouth meant that the popularity of her classes grew, she then opened the Vinery Road studio next to her home a year ago. 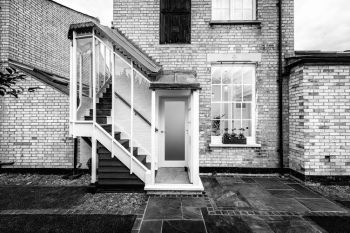 The Studios themselves are stunning. They’re all white walls, high ceilings and gentle lighting, and you can tell they’ve been designed with serenity and simplicity in mind. The lovely thing about Pilatesfit is that their classes are for a maximum of 8 people at a time. This means that the instructor is able to check on each attendee individually during the class, advising on and correcting their form where necessary.

As for my experience in the class, at first I thought “Pffft, this is easy. I am totally nailing this. I should have gone for the intermediate class.” This self-confidence lasted about 10 minutes, and was all but shattered by the time Michelle had me doing glute bridges on a foam roller. 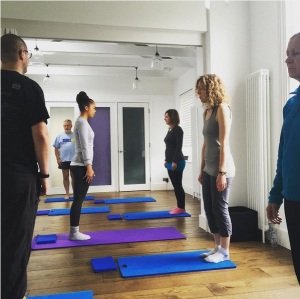 Michelle (on purple mat) in action. Photo from VineryRoadStudios on Instagram

Despite being in a fairly busy part of the city, what little noise from the outside world that managed to sneak in was quickly drowned out by the perfect background music to the class and Michelle’s gorgeous, soothing voice (she should do audio books on meditation. I would totally buy them). I found myself feeling so relaxed, which is not a state I’ve been in much recently. Don’t get me wrong – I worked hard, and my glutes and especially my hamstrings felt like they’d had a serious workout the next day, but I felt like I was able to drown out all of that outside crap that has been clamouring for attention in my head recently, and just be.

At the end of the class Michelle took her time to have a chat with me (despite having only 15 minutes before her next class started) and she also told me that I’d done really well and that she could tell I was strong. This girl had already sussed the way to my heart.

Now – down to the nitty gritty. Pilates classes at Pilatesfit are on the pricier end of the scale at £9 a pop. But you are getting more for your money compared to say a Pilates class that takes 20 people. You get one-on-one attention from the instructor during the class, and this is invaluable if you’re like me and struggle to get your ribs aligned properly or you find yourself holding your breath during more challenging poses, which makes them far more difficult. I suppose it depends on what you want from your Pilates class. They also let you pay as you go, which is a bonus when many Pilates classes in the city are based on a course of classes which you pay for in advance regardless of whether you can make every session.

Would I pay for these classes? The answer is a resounding yes. While I can’t afford to go all the time (at least not without reining in my Sweaty Betty addiction), I’m going to treat myself to a class at least once a month, because I got so much more out of it than just an ab workout. It’s impossible not to relax and centre yourself in a class at the Pilatesfit studio. They’ve just done everything so well.

Rowan is also doing a great job of building a strong community around Pilatesfit, with a great social media presence, and a gorgeous Instagram feed. They also offer more than just the classes –  they do 1:1 Pilates and antenatal sessions, as well as offering private physiotherapy, including sports injury treatments such as kinesiotaping, ultrasound, acupuncture, massage and sports specific rehab. They are also the only Physiotherapy clinic in Cambridge where all the physiotherapists are also trained to teach Pilates. They have so much to offer, and I think they’re a really great addition to the Fitness scene in Cambridge.

* When offering me the free class, Rowan never asked me to blog about it, but I have chosen to do so.

2 thoughts on “Pilatesfit – A Haven in Our Busy City”