I can’t believe it’s been a month since the Kevin Henry 5k League season finished! In the past this set of races ran until the first Thursday of September, but this year they compressed it into 5 months instead of 6. At the time I was pretty unhappy with this as it meant that sometimes there were only two weeks between races, and as someone who gets quite wound up in race situations (ahem) it felt like my stress levels remained consistently high.

But I love racing 5ks once I get going. Yes it can be really tough to sustain that “faster-than-is-entirely-comfortable” pace and to get used to that burn in your chest and the ache in your legs, but I love the feeling that floods your body after a fast 5k. I just don’t get the same runners’ high from other race distances.

I was nervous about how the season would go. Since changing jobs my training regime has changed considerably. My regular lunchtime track sessions have gone out of the window (which I really miss), and I’ve shifted my evening focus a bit more to working with our junior runners. So at the start of every race I was armed with a decent set of excuses (like I usually am pre-race) and I kept telling people I wasn’t as fit as last year.

Turns out I really need to stop whinging, as I ended up beating all of my 2016 race times apart from one. I’m basically the running equivalent of the boy who cried wolf. Here’s my breakdown (the times in brackets are my 2016 times): 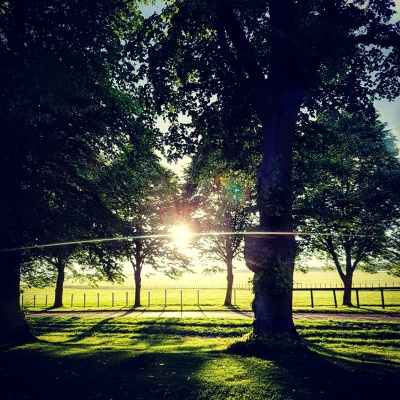 Newmarket was a pretty sight when we left at least…

Of the 6 races, Newmarket is the one that I stress about the most mainly because they don’t have toilets on site, something I’ve complained about before. They’re nearly 1k away, which when you’re a nervous pee-er, is simply not good enough (in my opinion) so I always start that race in a really stressed out state. It was also a warm evening, and I tried to keep up with an Ely Junior who had finished just behind me at the Ely race. As it turns out he was massively slacking off at Ely as he smashed Newmarket in 20:00 minutes dead and completed the last race of the season in 19:17. Blooming hustler. The moral of that story is to run your own race, not someone else’s.

The one I’m most proud of is Haverhill. Regular readers of this blog might remember last year’s meltdown but this year I dug deep and managed to pace it just right. I was a little disappointed at first not to have dipped under 21:00, but I soon managed to put my rational thinking cap back on to realise that to have taken 47 seconds off a 5k was utterly brilliant. As for the last race, I turned up to it completely exhausted. I have a little too much on my plate at the moment (all my own doing) and I was just running on empty. But I wanted to try and end the season having done all 6 races, so I was going to run it no matter what. Thankfully I happened to bump into Lauren Bradshaw fresh from some mental marathon, and she said her legs weren’t feeling too hot either, so we agreed to run together and aim for something like 21 minutes. Her famous last words were “you’ll have to drag me round”. 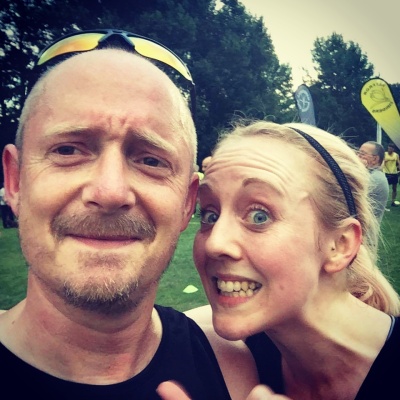 Did I heck. The absolute speed demon shot off, chatting to fellow runners on the way as I struggled to settle my breathing. The first 3k were really hard. I didn’t want to let Lauren down by slowing up as I knew she’d want to be loyal and stay with me, so I just tried to focus on my breathing as much as possible and not let the panic in my chest rise like it did at Newmarket. The headwind was also really unhelpful, but I kept having to remind myself that I’d be grateful to have it behind me on the final 1k. On the last 300m around the track I could suddenly hear someone thundering behind us. No way was I letting Lauren work that hard for us to be beaten on the line so I sped up and she responded and I finished just behind her. At first I thought I might have gotten a PB but it turns out that I was 12 seconds off it. So the 2015 5k PB still stands but you know what? That was a stronger season than I could have hoped for, and next year I can aim for that sub 21:00 Haverhill race and maybe even sneak that PB. 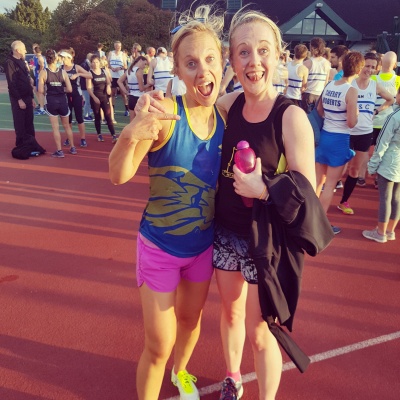 With the legend that is Bradders

* The C&C race had Lauren in the position behind me, but she definitely finished in front of me so I’ve put the times she was given.